frank news is dedicated to storytelling across all mediums. A space for debate, discussion, and connection between experts and a curious readership. Topics are presented monthly with content delivered daily.

Thank you for joining our newsletter.

The Cost of College

A Year In Preview

Native Americans in the Military

Michael Sankadota stared straight ahead from the sofa with wide eyes open, his face dimly lit only by the light of the television. He tried to relax as electrode pads sent out gentle pulses – to help with his intense migraines – from the base of his neck. His wife, Nikki, glanced from the TV to and then checked to see where each of their four children were.

Both husband and wife do not work, as Mr. Sankadota is 100% disabled and is cared for by his wife. Together they have four children. Mr. Sankadota, a veteran of the Iraq war, suffers from severe migraines as a result of traumatic brain injury, sustained from multiple explosions near his convoy while on tour there. He grapples with both physical and mental pain on a constant basis and wishes he could function better, but he just can’t. 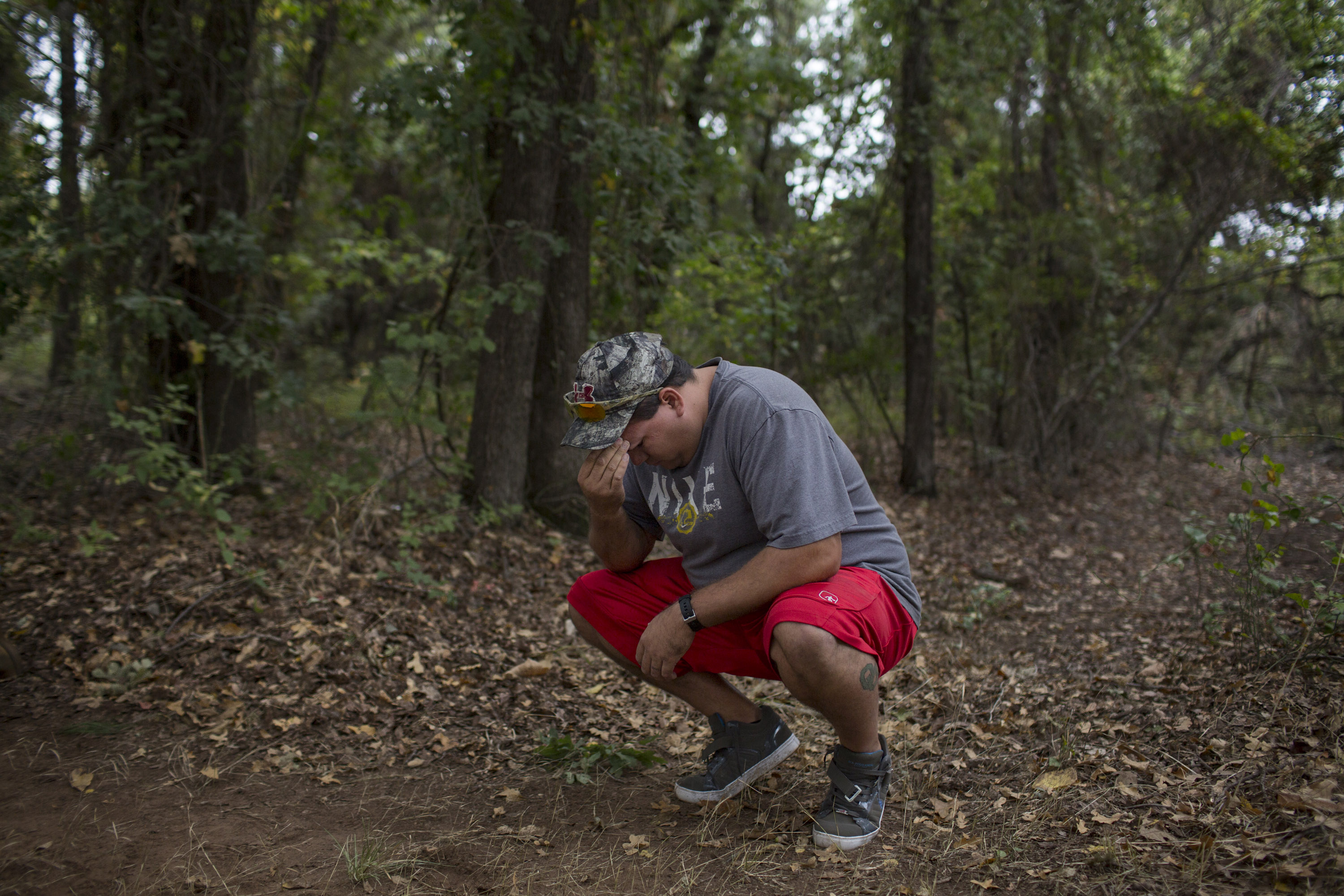 On this particular weekend, he is excited for one thing though: the ‘Ton-Kong-Gah’, or the Black Leggings Society of the Kiowa tribe, going to gather for their annual ceremony and Michael would be inducted as a new member. The ceremony, over 300 years old, remembers those who have served in the armed forces in various foreign wars. 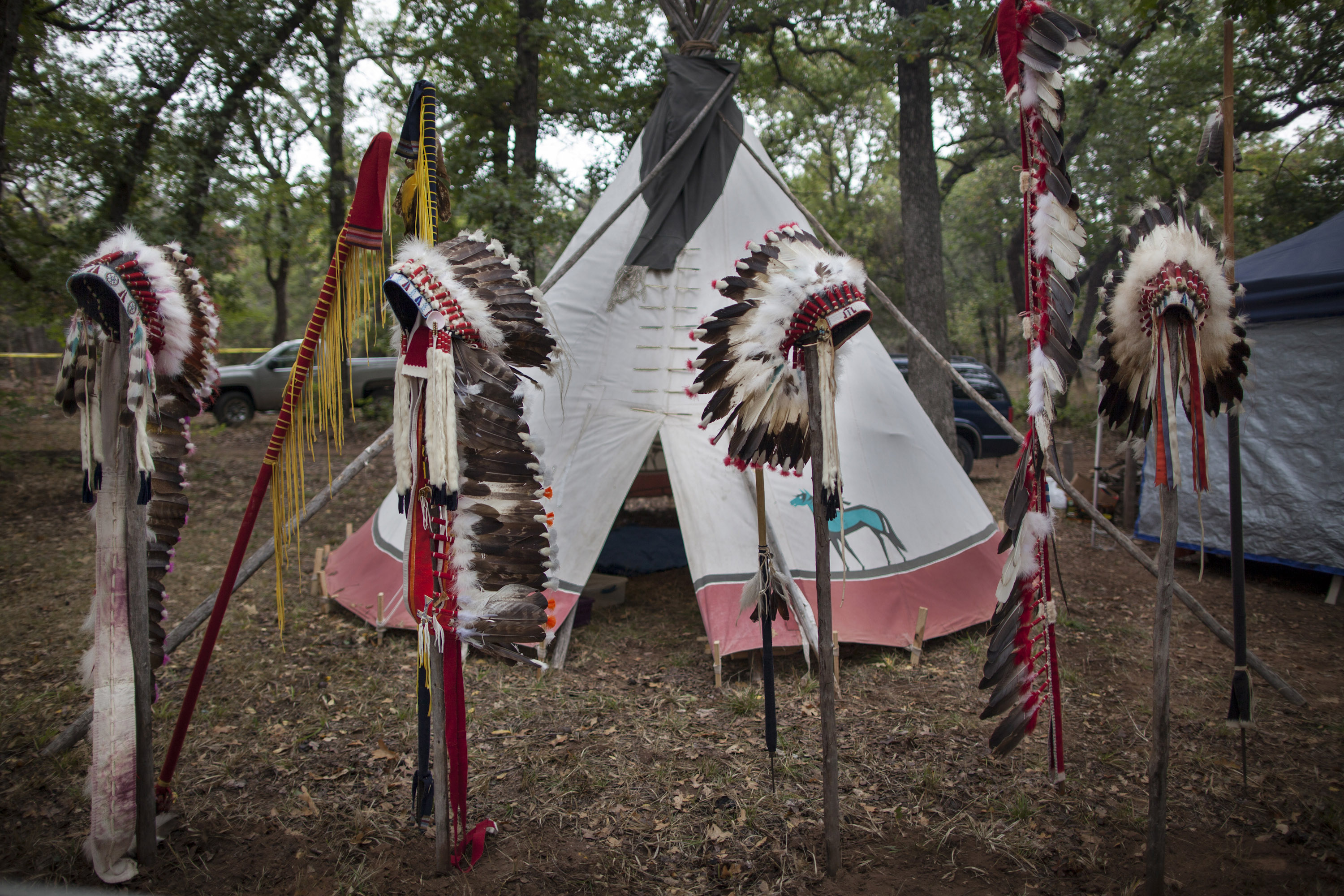 It is a tradition that is almost as old as the tribe itself, and is different from other veterans societies in the way their veterans are remembered – and revered – from their to their dances. Over a weekend in the fall, new members are initiated whilst older members lead the way, and the community of the Kiowa tribe come out to remember those who served. 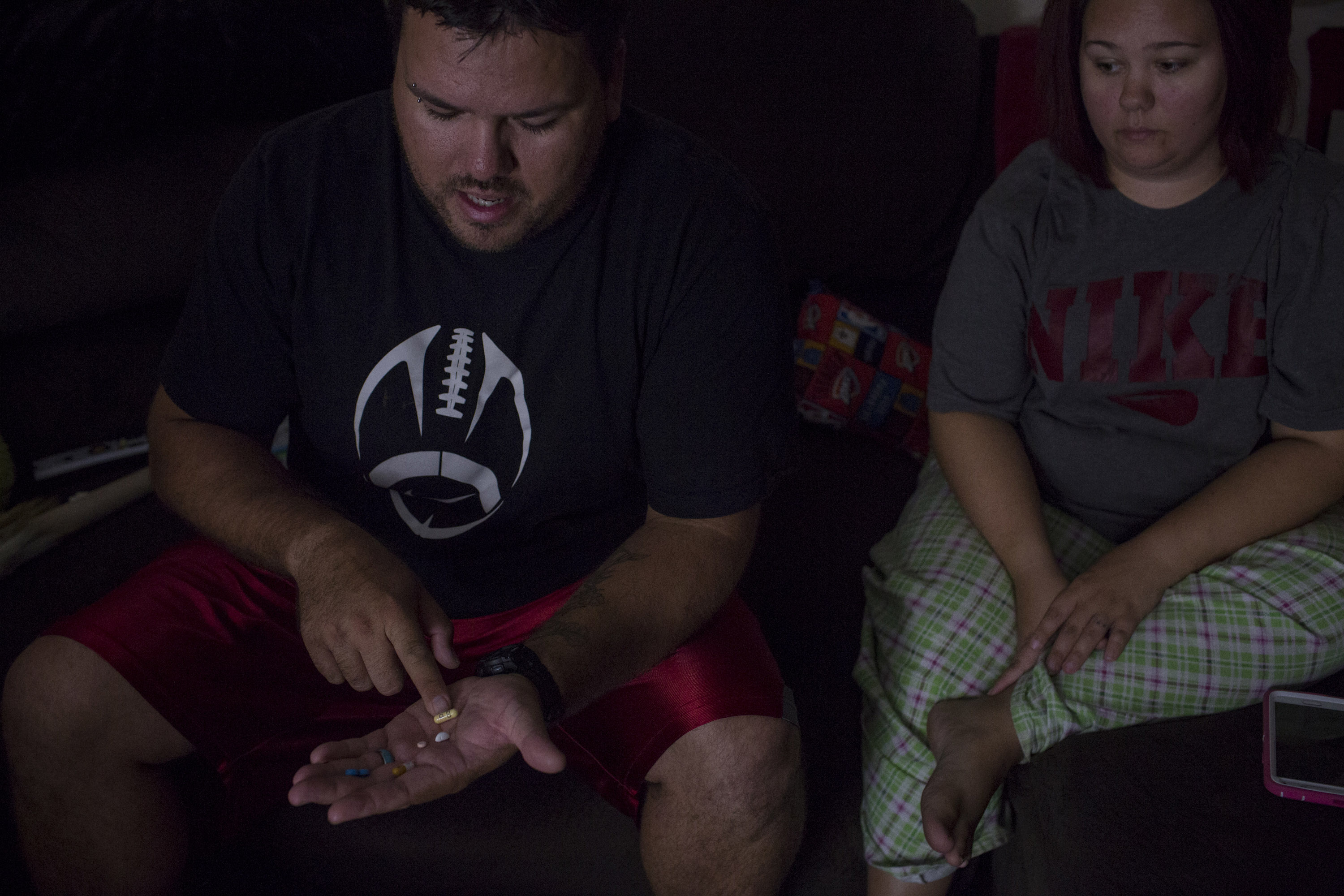 Michael would be initiated this particular weekend and he had some preparation to do, including building a teepee, which ordinarily wouldn’t be difficult. But on a grey Friday afternoon, he struggled with the physical activity as his migraines grew worse throughout the day. And yet he pushed through because of how proud he felt about becoming the Society’s newest member. “My kids will look at me , like, daddy’s this now, he’s a part of something bigger’’ he says, “and it feels a lot bigger than just what I am as a veteran.” 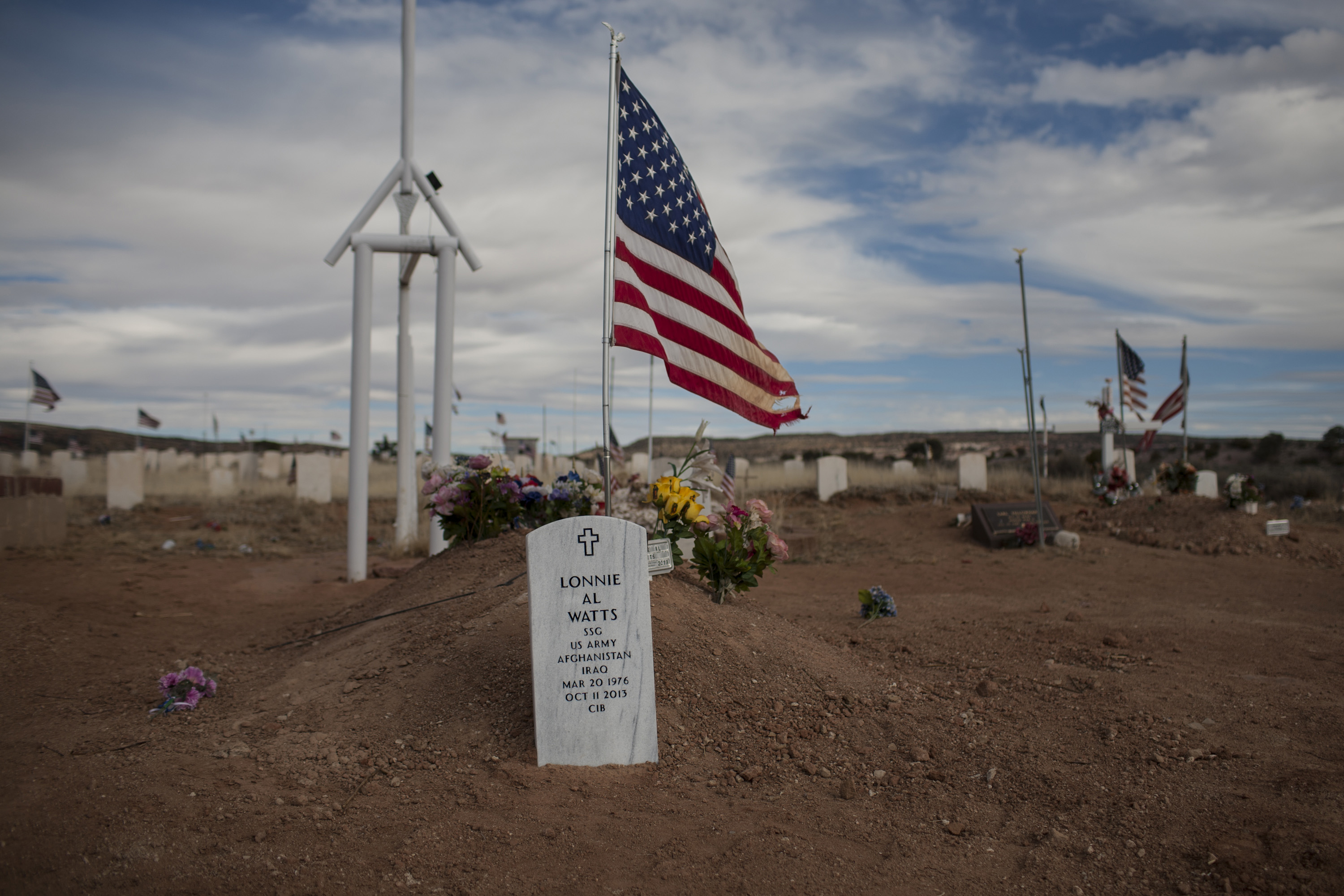 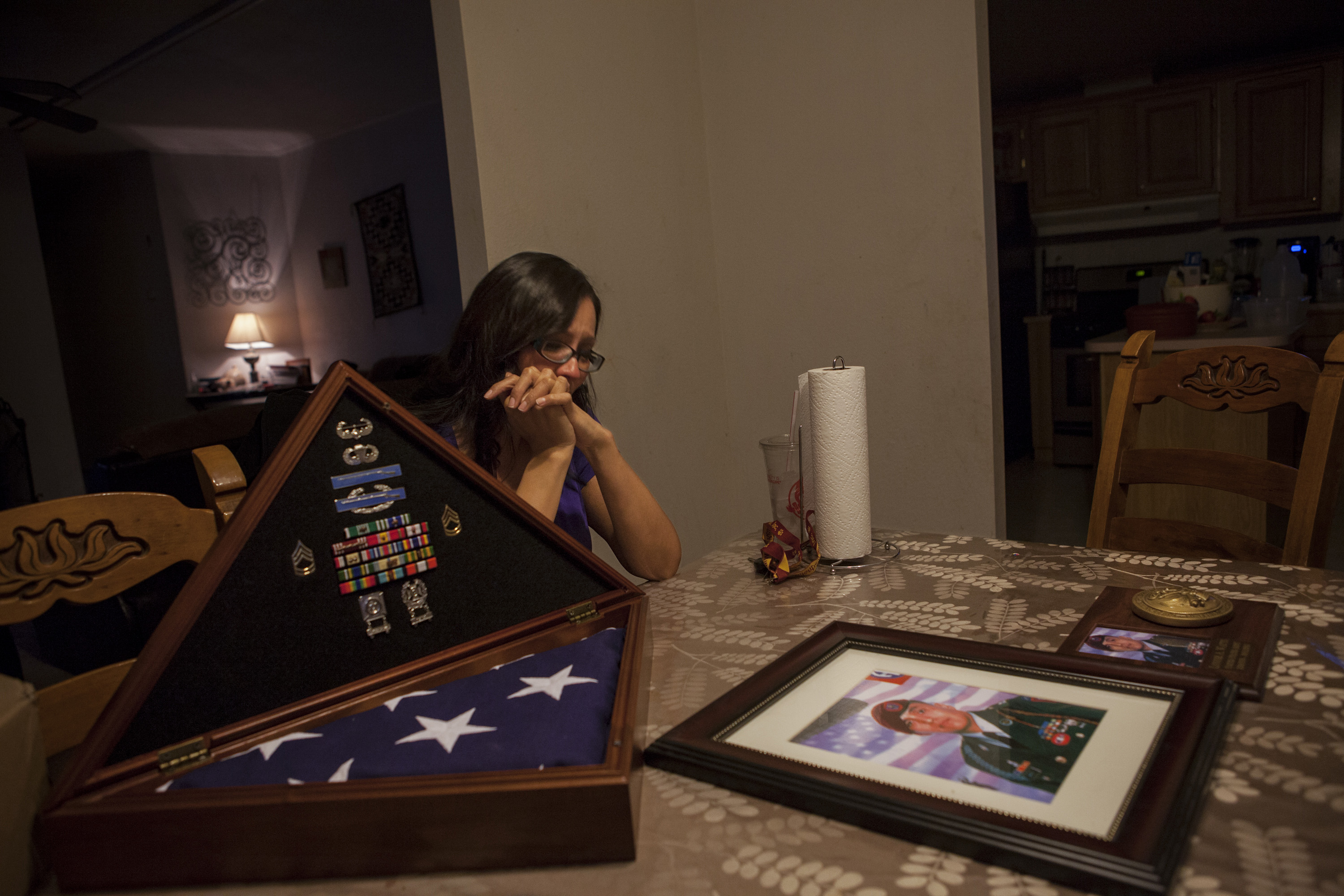 Native Americans are the largest minority group to serve in the U.S. military, but they are among the least served when they return home, especially if they live in remote communities. Many combat veterans suffer from symptoms of posttraumatic but are rarely ever diagnosed and have difficulty accessing counseling even if they are diagnosed because of logistical problems. Some have cited racism as an obstacle to help as well. To make matter worse, disability benefits often take years to be processed, compounding the lack of resources available to veterans.

Many also don’t have the kind of tight-knit communal support that Michael does, but that doesn’t mean they have not tried to forge their own path in overcoming the trauma they experienced or helping others do the same.

One state away in Pueblo, CO, Mitchelene Big Man prepared her jingle dress for a performance with her Color Guard. Big Man, who started the Native American Women Warriors, an organization aimed at raising awareness about female veterans, and women Native veterans particular, is a retired Sergeant First Class of the U.S. Army and served in combat during Operation Iraqi Freedom. 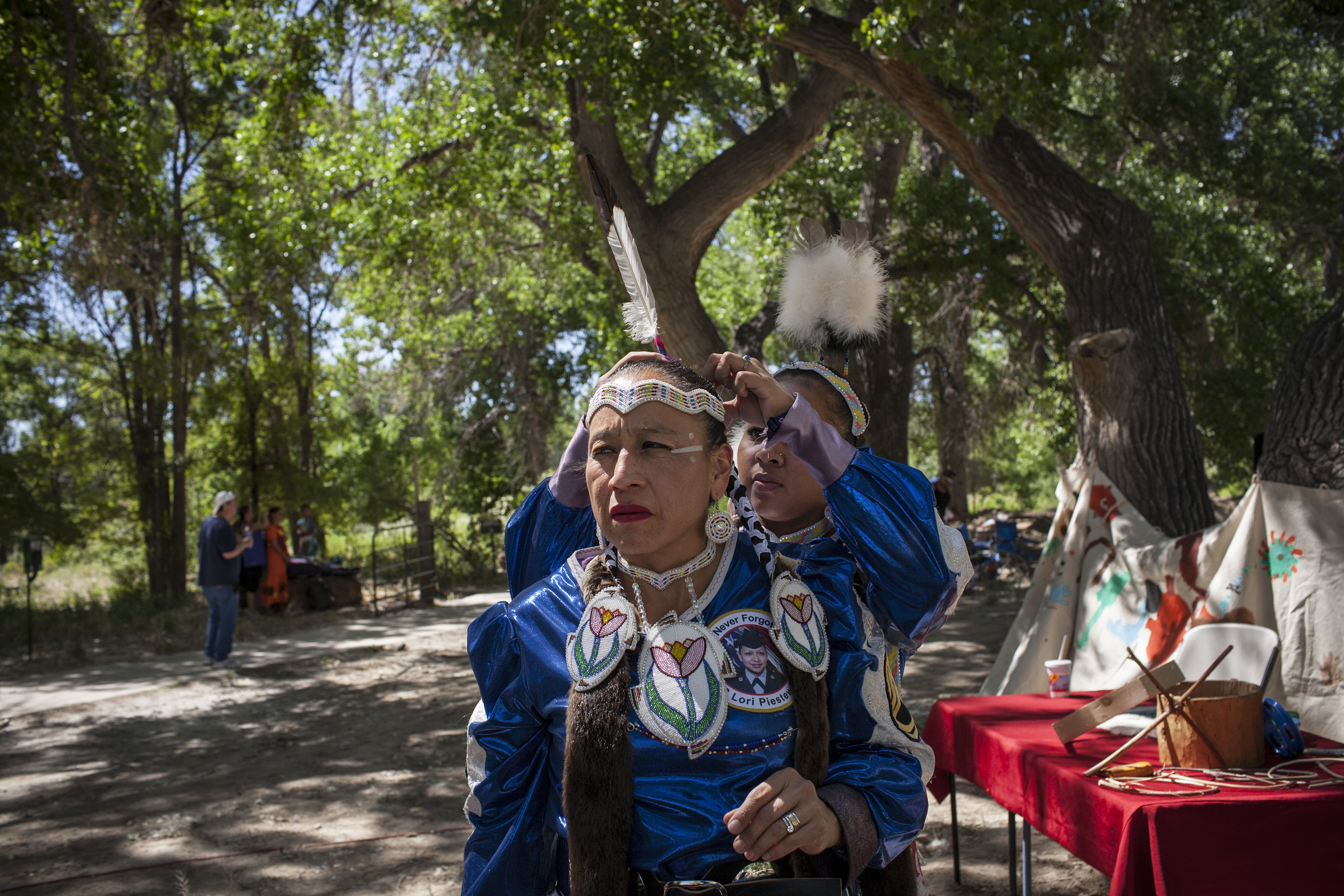 Her experience as a combat veteran, and as a sexual assault survivor in the military prompted her to use traditional dance as a way of healing the wounds of and has enlisted dozens of other Native American women too, where they dance at powwows and represent the face of women in the military.

We’re trying to get recognition for the Native American female veterans, Big Man said. A lot of people think we don’t exist in this country anymore, but we are here and we also serve in the military.

On the other side of facing war and returning home are the families who often have to deal with the fallout of PTSD. Latonya "Tasha" Johnson, 35, still grieves over her former husband, Staff Sergeant Lonnie A. Watts. Mr. Watts was deployed to Afghanistan after the start of the US-led invasion with the 82nd Airborne, an airborne infantry division and was later deployed to Iraq in 2005.

Ms. Johnson believes that her husband, whom she met after he returned from Afghanistan, was deeply affected by what he'd experienced in combat there, but refused to seek help or counseling to get diagnosed with PTSD because it was something "[he] was not proud of,” she said.

Mr. Watts turned to alcoholism to deal with the trauma and according to Ms. Johnson, always needed an adrenaline rush. Ms. Johnson says she wishes her husband could have sought counseling so that he would be alive today to help her raise their five children. 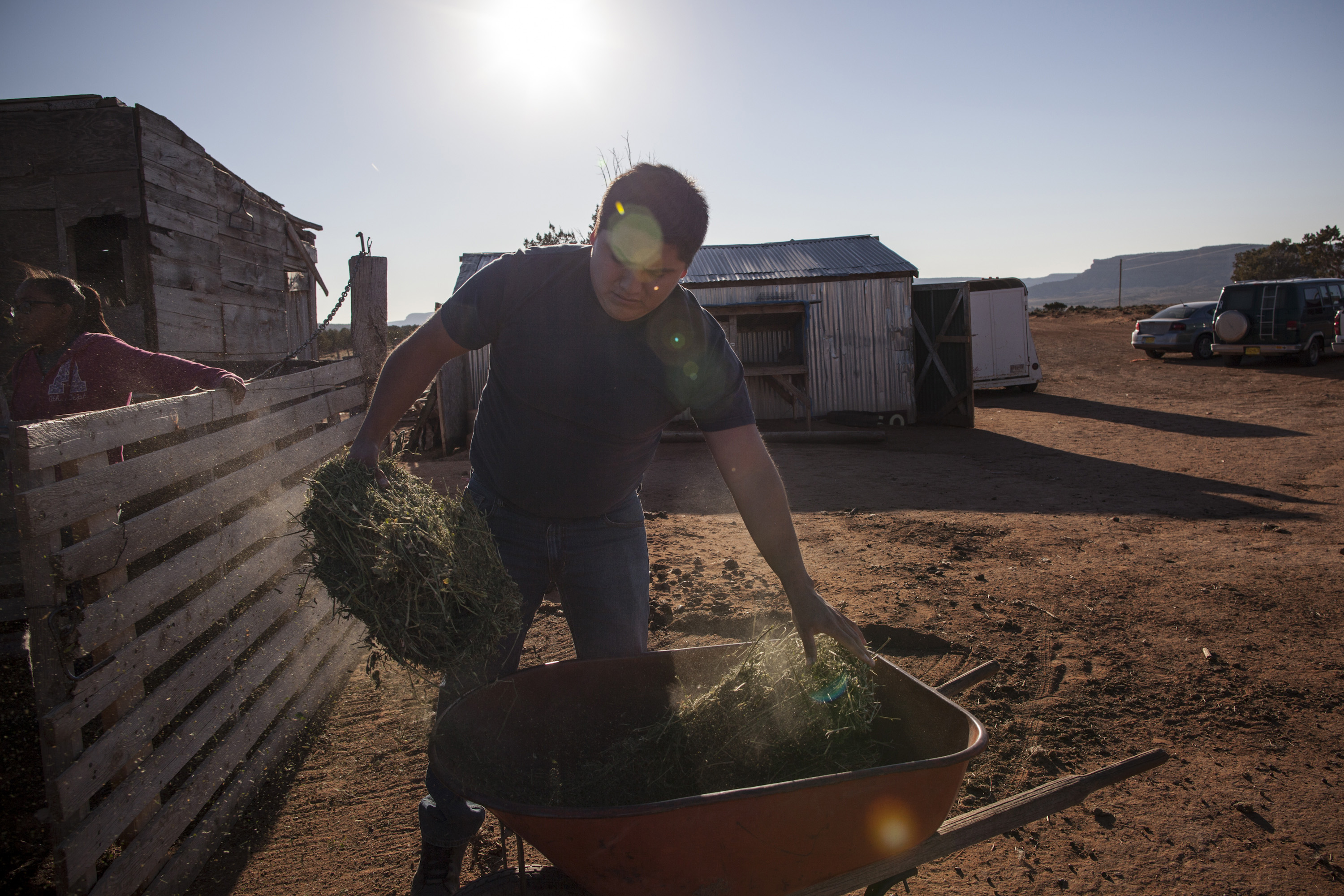 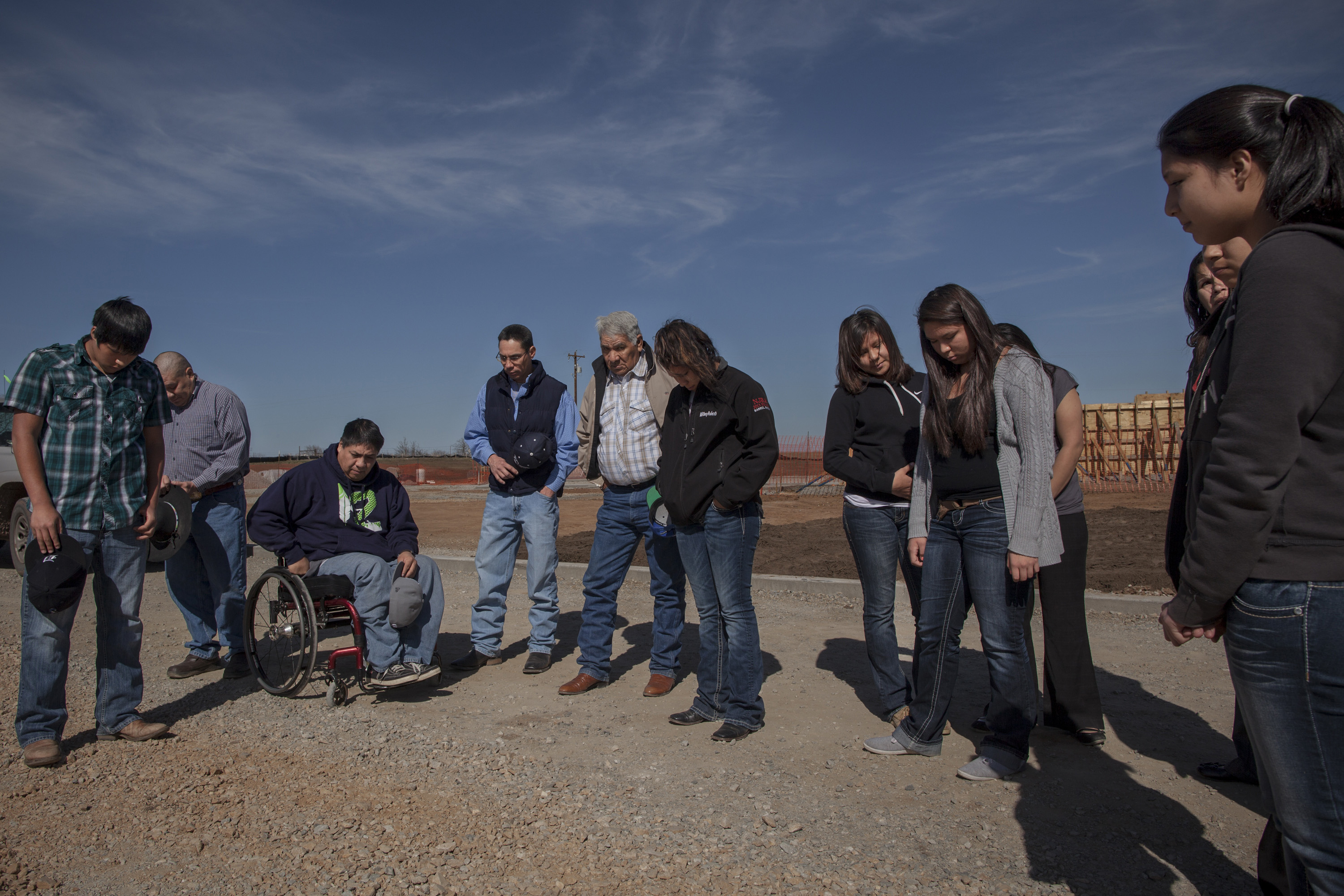 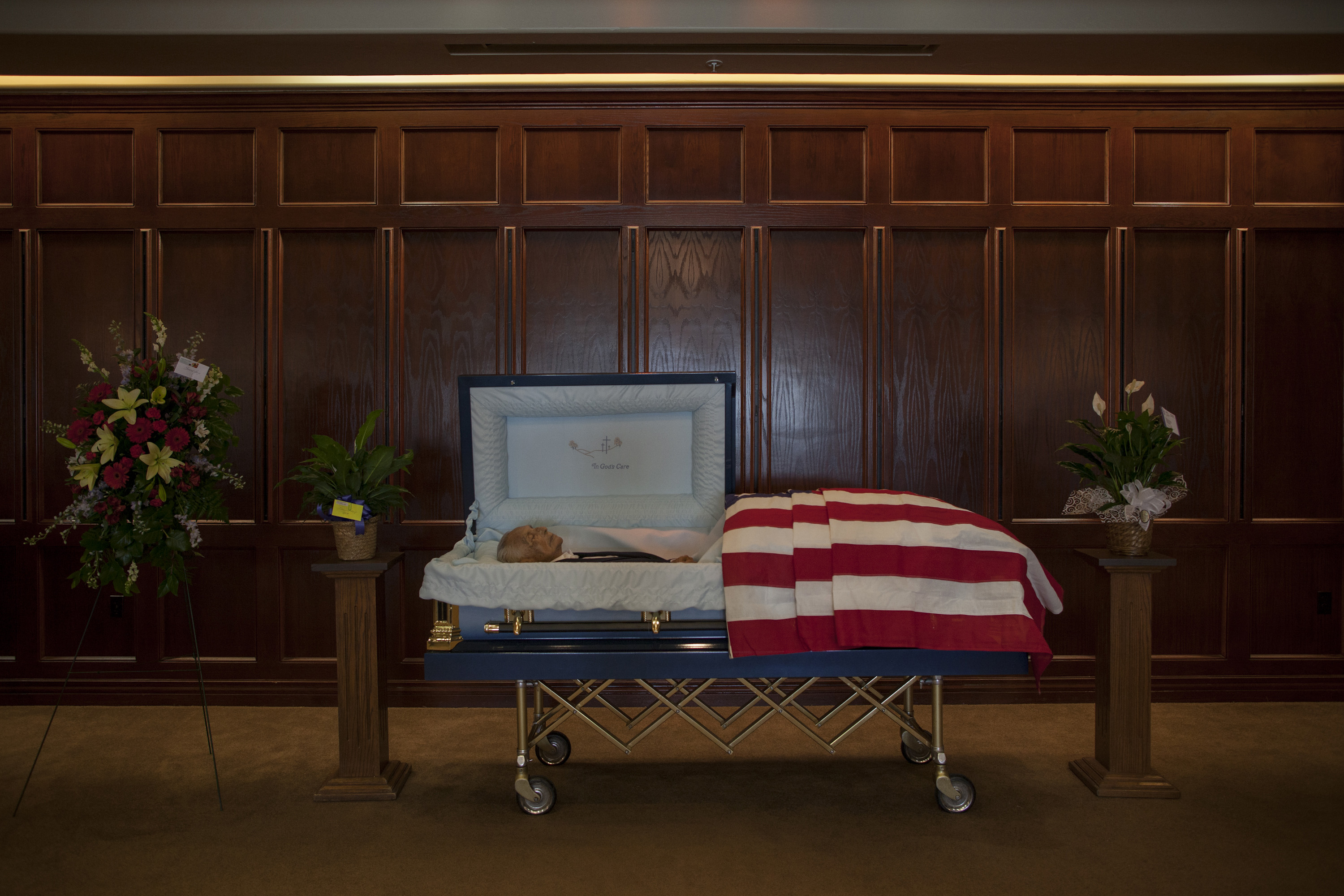 A Closer Look at the Migrant Shelters in Tijuana

Rebecca Mizrahi is a Freelance Photographer based in Los Angeles. You can see more of her work here.

Migration has been a constant across the world and throughout history. With the increased politicization of immigration in the United States, a true humanitarian crisis has emerged on both sides of the U.S. and Mexican borders. A day spent visiting shelters in Tijuana provided an intimate setting to hear first hand stories about the violence, poverty and persecution that compels migrants, refugees and asylum seekers to leave their homes and risk everything for a chance at a new life in the United States. Most obvious in people’s stories is a sense of grief and loss, ongoing fear and uncertainty about what’s to come, and a tremendous longing for a safe, secure future. These images are from a day in the life.

The “double” border wall is visible from a bus in Tijuana. Non-profit volunteer organization, Border Angels estimates that since 1994, about 10,000 people have died in their attempt to cross the border. According to the U.S. Customs and Border Protection, 7,216 people have died crossing the U.S–Mexico border between 1998 and 2017. Conflicting estimates.

Malecon, Playas de Tijuana. The border wall stretches into the Ocean but does not stop families from meeting to talk and pass notes to each other on either side. Although recent efforts seek to prevent this from continuing to happen.

One of many “missing” in Tijuana, one of the largest border metropolises in the world. It is not uncommon for male and female migrants to become trapped in the sex trade, with very few options to survive while they wait for asylum.

New tents, clothing and food provided by This is About Humanity. Name of shelter is concealed to protect asylum seekers fleeing violence/ persecution.

Donated blankets used for padding in lieu of mattresses.

Children’s vitamins and prenatal pills sit atop a makeshift office in the center of the shelter.

Child watches as new tents are set up and old blankets are removed, a bottle of medicine and a plastic spoon beside her.

A family watches as the shelter is overturned by volunteers trying to clean up after heavy rains.

Diapers, a few toys and a math book show the simplest accumulation of items for a migrating family. Children have no way to attend school while moving from shelter to shelter and can go anywhere from a few months to several years without formal education.

According to Casa Cornelia, about 90% of asylum seekers without an attorney are denied, but almost half of those with representation are successful. As of mid-2018, over 700,000 asylum cases remained open, with new applicants applying each day.

A Look Back at the Arizona Students' Association

This interview with Cesar Aguilar, the executive director of the Arizona Students' Association, was conducted and condensed by frank news.

What are the overarching priorities of ASA?

We do this by educating students on how to lobby, how to navigate power, and how to get a seat at the table making decisions. When we first started we were fighting for the 26th amendment – which gave students the right to vote at 18. We still focus on voter rights for young people.

How did you get involved in the ASA?

I got involved when we were connected to the National Student Association. President Obama was doing a lot of reforms to higher education. I remember jumping on a phone conference with the Secretary of State.

Everyone was at the table helping the secretary of education, Arne Duncan, with Obama's executive orders on reform on student loans. That was when I was like "wow, this organization is actually doing something about what is going on."

Below is a brief history of the ASA – and highlighted examples of their decades of work.

"PTSD (posttraumatic stress disorder) is a mental health problem that some people develop after experiencing or witnessing a life-threatening event, like combat, a natural disaster, a car accident, or sexual assault..."
Read More